I have been playing through Quake 4 again for whatever reason.

The only annoying thing to come up with this play-though so far was the fact I was killed several times before I was finally able to damage the Makron enough for him to decide to capture me instead! I know there is this "immersion" lobby that screams at someone suggesting this, but would that not be better as a cut-scene? Having to fire a few pot shots before it decides to grab me with a tractor beam it had all this time and could have used to prevent itself getting at all damaged in the first place breaks the suspension of disbelief more than any damn cut-scene!

Minor criticism though, still is a good game. Made up for it with the Stroggification scene, which definitely was a good thing to have kept in game rather than a cutscene. It still does however show up the folly's of the "first person ghost" effect when you see your body for a short while only to have it when you look down upon yourself later on you have no legs!

Sorry for the rant, but I had to get that out of my system.

Yes, Revenge of the Sunfish.

I'm really not so sure myself.
Top

I am currently playing through Rune using the Linux port somewhat ironically made by Loki Software.

I have never been particularly impressed with the original Unreal engine in terms of graphics compared to its contemporary competition, but Rune seems to have used it well. It is also one of the few times I have found a third-person interface to actually aid game-play rather than hinder it with odd camera angles and odd jumping puzzles. We willl see how my opnion of it is after I finish the game though.
Last edited by Tchernobog on Mon Apr 16, 2018 05:58 pm, edited 1 time in total.
Top

Rune was a great game!
Top

That is an interesting way of phrasing if you think about it... Rune was a great a game. When one says "he was a great man" it usually entails that the guy is dead and disappeared, but Rune is not dead or disappeared as shown by the fact I just started playing it. It is interesting that we refer to older forms of media as "was" even though "is" still might be more appropriate.
Top

True, but you probably aren't picky about it when people say "That was a great movie." Even though the movie still exists and we could watch it again, at any time. It is refereed to in the past-tense, because we have finished watching it, and know what happens.
Top

Currently I'm playing Devil May Cry 4 which is really awesome. The graphics is superb and the story is beautiful. The enemies are also very challenging. I'm addicted to it.

Arkham Asylum. I just finished it. Man that game was amazing!

Yeah me too. Batman AA stomped arse pretty gud. I was getting some disgusting scores on the combat challenges.

Here's my highest score for Round 1 of the Intensive Treatment combat challenge:

Intensive Treatment, eh? I'll give it a try and see if I can get anywhere close to that. The only thing that kicks my ass is timing the blocking. I can get it about 40% of the time. But yeah I'll get some monster combos as long as I don't forget about blocking, which I tend to do. Haha.

I'll post my result here in a bit.
Top

Corbin wrote:Intensive Treatment, eh? I'll give it a try and see if I can get anywhere close to that. The only thing that kicks my ass is timing the blocking. I can get it about 40% of the time. But yeah I'll get some monster combos as long as I don't forget about blocking, which I tend to do. Haha.

You can keep your combo going by doing stuns, and by vaulting over enemies. You'll see what mistakes are c-c-c-c-combo breakers.

heh. You have to get 9 different moves into your combo for variation bonus. They are as follows: Tips:
Top

Since we have gotten a little inactive again, I decided I would post here again to try and liven things up.

Well, in the past month I have played through all of both Star Trek: Voyager: Elite Force and Star Trek: Elite Force II through the use of Wine again, which was has actually entered a fairly stable period at the moment. Thanks to some new work on their mouse code, my main technical complaint against Wine is beginning to be alleviated. I was able to play both games at my full native resolution with a proper working mouse with no more glitchiness or other issues, with the only apparent fault being that in the original game some of the characters seemed to have some jerky movements, and some clipping issues.

In one of the missions on the Dreadnought ship, I actually had one teammate get stuck in the wall, forcing me to try and force him out with weapons fire. But with only phaser and dilithium based weapons, how the hell was I supposed to get splash damage? I tried some compound grenades, but it only made him bitch, so I upped the ante to a photon burst, which obliterated the teammate and forced me to kill all of my other mutinous teammates. Despite my valiant but sadly futile efforts to help save my trapped teammate and my successful crushing of their viscious mutiny, for some reason the game forced me to go back and load a previous save. What on earth did I do wrong?

Though, to be fair, Elite Force II was also not blameless. I do not know if this was part of the clipping issues, but in one of the early Attrexian levels, you have to activate a cart of some sort to blast through a blocked doorway. Unfortunately, one of the poor helpless Attrexians I had saved earlier may have been safer if he had stayed with the aliens, as when the cart arrived it slowly slid under his feet, picked him up, and sent him and the cart headlong into the door. I must admit though, the look on the poor man's face as he was slowly lifted up from the ground and started moving away from me was priceless.

Also, I believe these images of what happened later on in the game can speak for themselves:

Still, the new mouse code being used by Wine is not yet perfect, at least in the admittedly out of date version I am using, because if a title has a large dependence on DirectX for its inputs it will have this odd problem where you will suddenly be forced to look down at the floor, especially during moments of intense mouse usage such as heavy combat. This problem has so far bit me in both Blood II and Star Wars: Republic Commando, though playing the game through a Wine desktop can sometimes alleviate the problem. Still, it was enough to kick me off my Wine kick for a bit, and start playing through the native goodness that is the Penumbra series again. 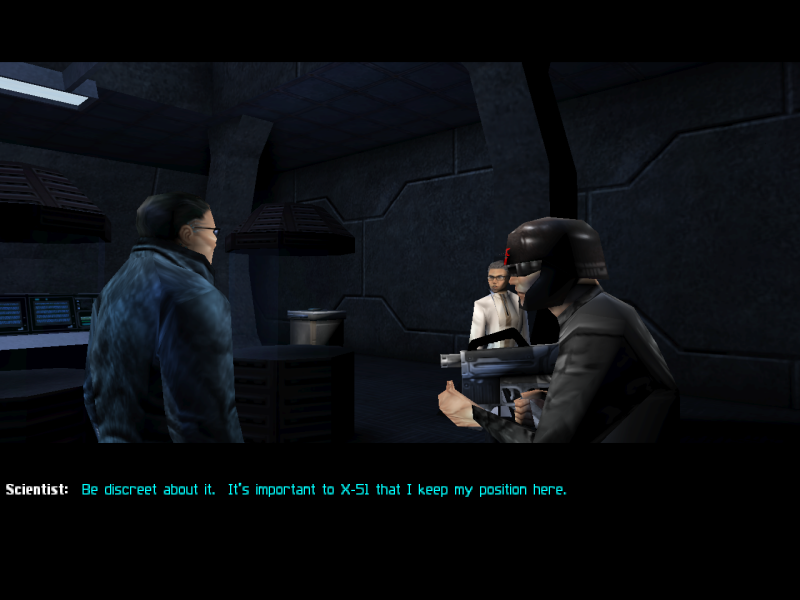 This time around I was also playing it alongside watching a Let's Play of the game, which was actually a pretty rewarding experince, as it shows you a lot of different play options you may never have considered:
http://www.youtube.com/playlist?list=PL441A8E80769A9A9B

In particular, it shows you the best way of dealing with Anna Navarre and the most effective way of saving Paul.

I am also in the middle of playing another Ion Storm game through WINE at the momment, which I will post about after I finish with it.